So, over the past 25-30 years, there have been many instances where people have come up to me and said "frank, you need to check out this team, they're running a system similar to your offense" or "check out this player, or so and so....he's got moves similar to yours..." and invariably i'm disappointed.  In the 80s it was first the thrower initiated German offense, which didn't even hold a candle to what I was doing.  Then there was jam's plink-o (a major disappointment and incredibly illegal).  In the 2000's, there were the buzz bullets who were not even close to the offense I run.

There have been a smattering of players who held promise over the years but no one really very close.  I have to say though, that after these past few decades, the closest I've ever seen is Dylan Freechild.  With some proper coaching, the dude may be a decent player someday.

this is a short video of Dylan dribbling.  If you look up dribbling in the dictionary, not only does it mention basketball, but it also refers to soccer and hockey and in la crosse, there is cradling which is ostensibly the same thing.  The one unique thing about dribbling in ultimate is that it requires teammate cooperation, you can't dribble by yourself (that's only in dischoops).

I had some debate with some friends of mine on whether or not this was dribbling, but upon further reflection, I have to say that this sequence is definitely what I refer to as dribbling, but with a caveat.

Dribbling is a very specific form of give and go move that can be defined as the player running with the disc and clearly what Dylan is doing here is literally running with the disc, legally.  the disc is never more than a a few yards or a few milliseconds away from him and he traverses about 35 yards laterally and diagonally upfield on this run.

It's Sort of like running with your dog at the beach without a leash.  Running with the disc does not necessarily mean carrying it, it just means running with it.

However, when I asked him after the game what his intention (his purpose) was here he said "to move the disc downfield"

That's not much of a purpose.  If you wanted to move the disc downfield, why not do what everyone else does and [after COMMITTING a traveling violation] throw the disc up field?

This sequence is a tremendous amount of effort and risk (five throws instead of one) to move the disc 20 years when a flick to an in cut could have easily accomplished the same thing.

I would say that this is where I was at with regards to dribbling circa 1989.

After I had been playing for 10 years, I had gotten bored with conventional offense and started to gravitate towards this style.  However, in 1989, I would have done exactly what Freechild does here which is to ultimately turn the disc over (in the sequence, after he didn't get the disc back, he curled up field back into an 'in-cut' which was low and hit the turf.  Dylan is mostly running around like a chicken with it's head cut off not really appreciating the effect he's having on the overall defense, not to mention doing anything about that to exploit it.

However, I've spent nearly 30 years [longer than freechild has been alive] advancing the techniques, continually adding more variances, ambidexterity, different pivot feet, up and under moves, stunts, drop steps, swim moves, different throws and so on and also gaining a sixth sense for the effect that all these techniques were having on a defender and a defense as a whole.

As I mentioned, dribbling is a refined subset of give and go which is why I'm reluctant to call dribbling give and go.  All dribbling is give and go but not all give and go is dribbling.  For example, in this VIDEO, it's clear that Ben wiggins doesn't know the first fricken thing about dribbling and is only talking about very rudimentary give and go moves so I strongly recommend differentiating between the the two.  Dribbling is much more refined.

In much the same way, penetration is a highly refined and specialized form of dribbling.   The difference between a basic dribble and penetration is all about purpose or intention.  In this same exact sequence, if Dylan had intended to penetrate and break down the defense, then this would have been penetration, but without that intention, it's just dribbling (and fairly crude at that).

he did an excellent job of Breaking down the defense here, but because he didn't have that as a purpose, it is just dribbling.

Take a look at this still image from the middle of the sequence. This is really incredible.. 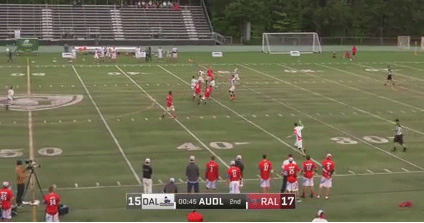 I've blown up the image below and highlighted where 5 out of the 7 total defenders are.

I'm guessing from looking at the hashmarks and other dimensions that the 5 defenders in the photo are standing in what looks to be approximately 25 square yards.  It's a swath of turf about 10 yards wide and 3 yards deep at it's apex. 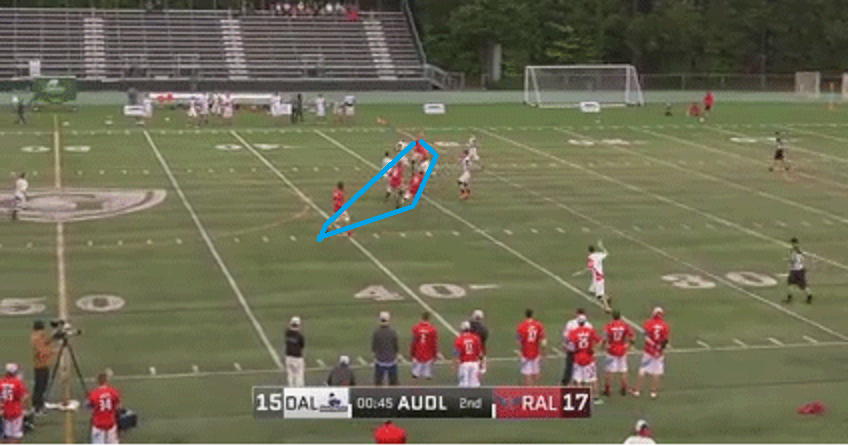 Try to get your head around this.

As a RESULT of Dylan's dribbling, at this moment in the middle of the sequence, he has manipulated 5 defenders into 0.3% of the entire field space!!!

What's more remarkable is how clueless he is at what he accomplished and how he then converted this phenomenal leverage he had gained over the entire defense into a turnover.

It's all the same and it's been the same for decades.  garbage.

there can be no debate about this.

everything you think you know about ultimate changes when you understand the incredible amount of leverage you can gain over a team via penetration.

I'm 57 (as of a week from today), 15 pounds overweight, extremely out of shape and easily winded climbing a short flight of stairs but utilizing the many dozens of highly refined, ankle-breaking, sophisticated dribbling moves I have developed over the past 30 years, I can easily break down just about any defender and any defensE.

I'm on record claiming to be not only the greatest player ever, but the greatest player in the game today.  At my age, I shouldn't be in the top 1000 but as long as I'm the only player who knows how to effectively penetrate, I am the greatest and there SIMPLY isn't a close second.  However, when and if you all learn how to play this god forsaken game properly, I will quickly (and very happily) hand over the crown. Until such a time however, I am it.

For any of you who doubt this, jim gerencser has made a handshake agreement with me to have me down to dallas to scrimmage with the roughnecks and demonstrate how dribble drive penetration changes the game.  The only condition I made is that I would need an hour to 90 minutes to get a handful of quick, intelligent disc handlers (muffin, Freechild, bennett, coffin, etc.) to run a few drills and get them on board with some of the basic concepts.

Maybe then we can get the elusive motion offense video that for so many years ultimate players everywhere have been clamoring for .

the [flat] ball is now officially in gerencser's court.