"I enjoy playing 'schoops.  It is fun, a good workout, and a nice alternative to the traditional 'stationary thrower' disc sports.  It is somewhat similar to Goaltimate, but it is superior in this respect:  In Goaltimate, one man can defend two offenders (drop off the thrower and cover just the cutter).  In 'schoops, a 2 on 1 is a real advantage, as you can throw a goal to your teammate or score by yourself. "

"I'm a long-time goaltimate purist (retired from ultimate, transplant from San Diego), so I have to admit that I was a bit skeptical when I first heard about Dischoops. After 15 minutes of actually playing it though, I was very impressed. The self throws (dribbling) adds a new dimension to the game and the opportunity to incorporate "jump throws" allows for added creativity when throwing scores. Its the best workout I've had in a while, and I'm already looking forward to the next game -- two thumbs up!

P.S. the official goals that come in the dischoopskit are hands down the slickest goals I've ever seen."

"Dischoops offers a greater variety of play and playing styles than a lot of sports. It's a very playable game regardless of individual strengths and athleticism, although it also doesn't suppress either. I don't think it's right to compare it to Ultimate. That's akin to comparing soccer and volleyball: similar balls, but the sports aren't much alike.  Dischoops stands apart. I particularly appreciated the lack of subjectiveness when it came to fouls and their enforcement, contributing to greater fluidity of play. I'm glad it's catching on in Northern Virginia and I'd like to see it continue to do so."

"I saw some RSD battles looking to discredit Dischoops,
but I'm really glad I joined in in Alexandria. It was fun, less stop-and-go,
and it could be played full-on even with less people."
- Amanda Fairfield, musician and artist, Washington DC 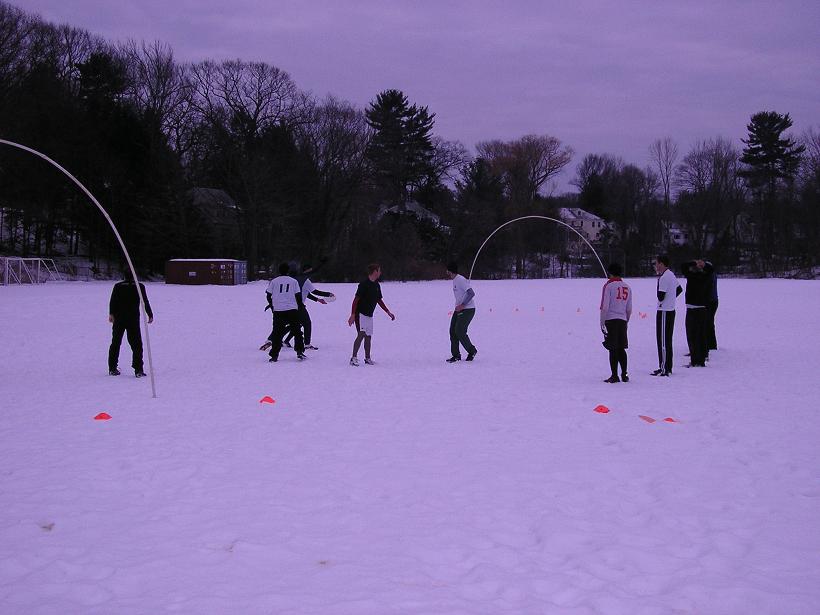 (dischoops in the snow in Boston)

"the game was much more tiring than Goaltimate....It would be cool to have a real legit point guard at the top of the key who could create opportunities for slashers and big men down low. Just like basketball. I am sure if we played more we could tinker around with these kinds of offenses....Thanks for your work on the sport"


"........It's
definitely a workout. We had some pretty good games going last
offseason, and if the opportunity presents itself again this
off-season, I'd play."
Bart Watson
#24
Jam

"Some very annoying people play Ultimate Frisbee and I know it's
early on, but I haven't found that with Dischoops yet. It's good to
be able to enjoy it when I play."
- (anonymous female player), graduate student, bartender/waitress and Ultimate player

"I think it can be developed for cross-training, but it's also a sport
worth at least trying for itself. I wouldn't worry about it being a threat
to Ultimate since there are so many devotees of Ultimate out there,
but it's just as fun and just as challenging. “
- P. A. Wyatt, teacher and high school coach


"It's fun; it's fast-paced, and I certainly agree with
[the rule changes] that Frank made..."
Ian Ranahan
#1
Bay Area Revolver

"...we did play for a couple hours this weekend and had a good time at it.  It was a good workout and it's always fun to learn a new game.  When we first started playing it was a circus, with every other attempted dribble being bobbled away and, not being used to the ability to knock the disc out of someone's hand. But by the end we were getting the hang of it, figuring out how to use the rule differences effectively, and had a couple of really good games. We played a best-2-out-of-3 series to finish, games to 5 points, and game 3 went to overtime, with a 7-5 final score. It's a cool game."
Sam Chatterton-Kirchmeier
#14
Seattle Sockeye

"awesome game, thanks for inventing it!"

"..The general consensus from those who have played disc hoops is: people
like it. The fast paced nature of the game along with it's deviations
from other small field disc sports like goaltimate or mini make it a
new and exciting experience. And a hell of a workout. I personally
prefer it over goalty or mini.

I really like the new rules introduced into disc hoops. I enjoy the
pace of the game and I enjoy the stiffer penalties for violations. It
has helped me travel less, that's for sure. I look forward to playing
and experimenting with the game in the future."
Ray Illian
#99
Seattle Sockeye

I've played dischoops more than a handful of times and would
definitely play again....it's a workout.
Bobby Nguyen (bay area)

"It brought me together for a good time with my wife."
- Andy "Avalanche" Jamieson

"I've played dischoops maybe 10 times and it was fun every time. Like
Bart, I'll probably play again this off-season....

..Many of the rules seemed so wrong at first but then after playing you realize this is how things should be"

"......I don't understand it,... he was  wearing sneakers
he was not running very hard
and he was unstoppable.
This defies everything I've ever known about the sport.

I loved that Frank came to the tournament
It was historic and he needed to be there, and the community needed to see him. I've always been of the opinion that if you back it up, it ain't bragging."

UPA Hall of Fame Member
and progenitor of Goaltimate, Jim Herrick
upon watching me play Goaltimate at the
California State Games in San Diego in Tennis Shoes.

Jim Herrick at left.  This shot taken at the 2005 California State Games.